What is the Nutritional Value of Miso Soup and Is Miso Soup Healthy for You?

Miso soup is a traditional Japanese soup made from a fermented paste called miso, which is combined with dashi (a broth made from fish or seaweed) and often includes ingredients such as tofu, seaweed, and scallions. While miso soup is a staple in Japanese cuisine and has been enjoyed for centuries, there is growing interest in its nutritional value and potential health benefits.

Miso is made by fermenting soybeans with salt and a fungus called koji. The fermentation process not only adds a unique, savory flavor to the soup but also increases the bioavailability of nutrients such as vitamins, minerals, and amino acids. Miso is rich in antioxidants, which can help protect the body from damage caused by free radicals. It is also a good source of B vitamins, including niacin, vitamin B12, and folic acid, and minerals such as zinc and copper. Additionally, miso contains probiotics, beneficial bacteria that can support digestive health. 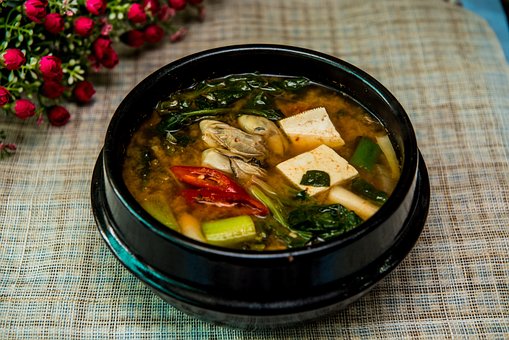 One of the most notable health benefits of miso soup is that it is a good source of soy isoflavones, which are phytochemicals that mimic the effects of estrogen in the body. Studies have suggested that consuming soy isoflavones may help reduce the risk of certain types of cancer, including breast cancer, and may also help to lower cholesterol levels.

Related:
What is the Nutritional Value of Greens and Are Greens Healthy for You?

Another benefit of miso soup is that it is relatively low in calories. A cup of miso soup contains around 50 to 60 calories, making it a great option for those who are trying to lose weight or maintain a healthy weight. Additionally, miso soup is easy to digest, making it a good choice for people with sensitive stomachs.

Miso soup, like most soups, is also hydrate, some studies show that consuming more liquids in a soup form, can help in weight loss, due to the “soup effect” that causes the person to feel full after eating a smaller amount of food.

Dashi broth that is used to make miso soup is also beneficial. Dashi broth is rich in minerals, vitamins, and amino acids. It is also a good source of iodine which is important for thyroid function. In conclusion, miso soup is a delicious and nutritious food that has been enjoyed for centuries in Japan. It is a good source of antioxidants, B vitamins, minerals, and probiotics, and may also have anti-cancer and cholesterol-lowering properties. Additionally, it is low in calories and easy to digest. However, because of the high salt content of miso, it should be consumed in moderation. And soy allergy should also be taken in consideration.