What is the Nutritional Value of Ribeye and Is Ribeye Healthy for You?

Ribeye is a cut of beef that comes from the rib section of the cow. It is known for its rich flavor and tenderness, making it a popular choice among meat lovers. However, many people wonder about the nutritional value of ribeye and whether or not it is healthy for them to consume. In this article, we will explore the nutritional value of ribeye and examine whether or not it is a healthy choice for your diet.

First, let’s take a look at the nutritional value of ribeye. A 3-ounce serving of cooked ribeye contains approximately 200 calories, 12 grams of fat, and 25 grams of protein. Of the 12 grams of fat, about 5 grams are saturated fat. Ribeye also contains a small amount of carbohydrates and dietary fiber. Additionally, it is a good source of vitamins and minerals such as vitamin B12, iron, and zinc. 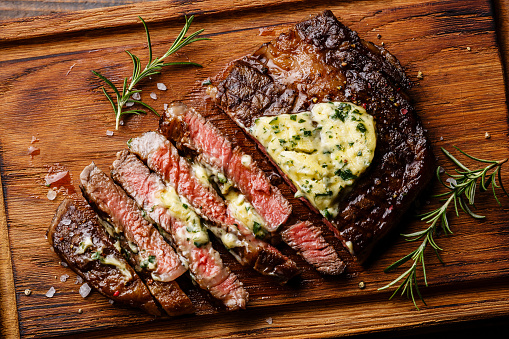 Additionally, ribeye is a good source of protein, which is an important nutrient for maintaining muscle mass and supporting overall health. The iron and zinc found in ribeye can also support healthy blood and immune function.

It’s important to keep in mind that moderation is key when it comes to consuming ribeye. While it can be a healthy part of a balanced diet, consuming too much can increase your intake of saturated fat and calories. The American Heart Association recommends limiting saturated fat intake to less than 7% of daily calories, which for a 2,000 calorie diet is less than 16 grams. Additionally, it’s a good idea to balance out your meals by consuming a variety of nutrient-dense foods such as fruits, vegetables, and whole grains.

Related:
What is the Nutritional Value of Ogiri and Are Ogiri Healthy for You?

In conclusion, ribeye is a delicious and flavorful cut of beef that can be a healthy part of a balanced diet. However, it is high in saturated fat and calories, so it should be consumed in moderation. By choosing lean cuts of ribeye and preparing it in a healthy way, such as grilling or broiling, you can enjoy the rich flavor of ribeye while maintaining a healthy diet. Additionally, it is a good source of protein, iron and zinc. It is important to keep in mind that it should be balanced out with a variety of nutrient-dense foods such as fruits, vegetables, and whole grains.