Sunflower oil is a popular oil that is extracted from the seeds of the sunflower plant. It is known for its mild flavor and high smoke point, making it a versatile oil for cooking and baking. But what is the nutritional value of sunflower oil and is it healthy for you? In this article, we will explore the health benefits and potential drawbacks of consuming sunflower oil.

First, let’s look at the nutritional value of sunflower oil. One tablespoon of sunflower oil contains around 120 calories and 14 grams of fat, of which 2 grams are saturated fat. It is also a good source of vitamin E, an antioxidant that helps to protect cells from damage. Vitamin E is particularly important for maintaining the health of the skin, eyes, and immune system. 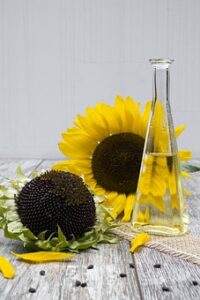 Related:
What is the Nutritional Value of Dry Coconut and Is Dry Coconut Healthy for You?

However, it is important to note that sunflower oil is also high in omega-6 fatty acids, which can contribute to inflammation in the body when consumed in excess. While the body needs some amount of omega-6 fatty acids for proper function, the typical Western diet is already high in these fats, which could contribute to chronic health issues like cardiovascular disease and certain cancers. Therefore, it’s important to maintain a balance of omega-3 and omega-6 fatty acids in your diet, by getting them from different sources of food, and also to watch how much sunflower oil is being consumed.

The smoke point of sunflower oil is also an important factor to consider when using it for cooking. The smoke point is the temperature at which an oil begins to smoke and break down, releasing harmful toxins. Sunflower oil has a high smoke point of around 450 degrees Fahrenheit, making it suitable for high-heat cooking methods like frying. However, it is important to keep an eye on the oil’s smoke point and not to exceed it, as it can cause the oil to break down and release harmful substances.

Another important thing to note about sunflower oil is that it is often highly processed. Many refined sunflower oils are made using a chemical solvent called hexane, which can leave traces of the solvent in the final product. Some also use high pressure, high heat and chemicals during the refining process that can affect the nutritional value of the oil. Therefore, it’s always a good idea to look for pure, cold-pressed, and unrefined sunflower oil, which is made using a mechanical process rather than chemical, and which will retain more of its natural nutrients. 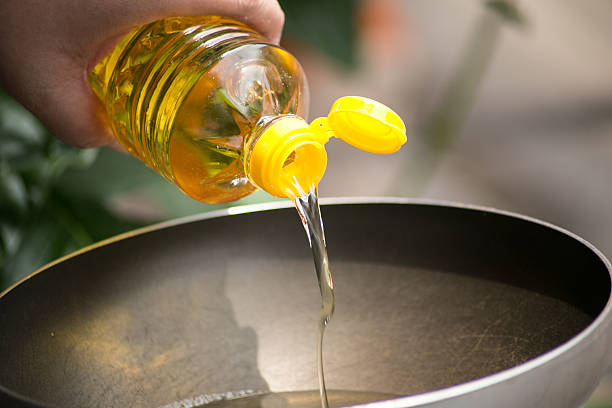 In conclusion, sunflower oil is a nutritious oil that is rich in vitamin E and polyunsaturated fatty acids, which can provide health benefits such as promoting heart health and maintaining healthy skin and hair. However, it is also high in omega-6 fatty acids, which can contribute to inflammation when consumed in excess. It’s important to maintain a balance of omega-3 and omega-6 fatty acids in the diet, and to watch how much sunflower oil is consumed. Also, it’s important to choose pure, cold-pressed, unrefined sunflower oil which are less processed and have better nutritional values. As with any food, moderation is key and it’s always a good idea to talk to a doctor or a nutritionist for personalized advice.